At the age of 18, he discovered a strange nodule in his right leg, but they did not act in time. 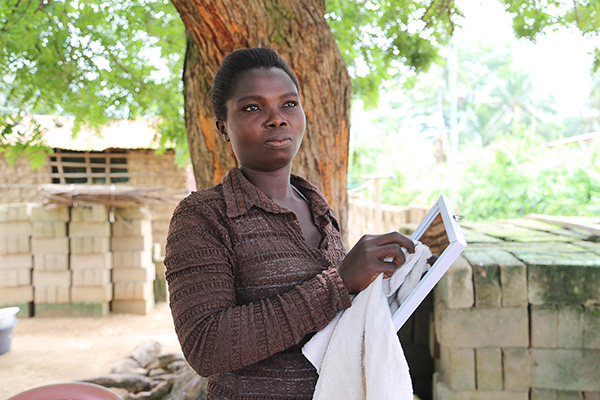 Mabel lives in Pakro Zongo, Ghana, and is a hairdresser.

At 18 Mabel noticed a strange nodule on her right leg. Before it had become too swollen, she showed it to her close family, but no-one acted quickly enough. The nodule grew and ulcerated, coinciding with the rejection Mabel was starting to feel in her community. It was at that point she stopped going out, and spent a year and a half shut away, only receiving care from her family.

One day, a community volunteer told her she probably had Buruli ulcer. He referred her to the nearest health centre, but the disease had spread to such an extent that she had to be transferred to a hospital in the Volta Region of Ghana.

After two and a half years hospitalised and after undergoing different surgery and skin grafts, she returned to her community and was reunited with her children, whom she hadn’t seen in all that time. Her body still bears the marks of the disease, marks that will be there for the rest of Mabel’s life, but she has managed to overcome her ostracism and has started her life again from scratch, learning a profession — hairdressing — which enables her to support her family.

To make this site work properly, we sometimes place small data files called cookies on your device. You can find more information in our cookie policy.
Accept
Configure
Cookie Box Settings
Cookie Box Settings
You can change these settings at any time. However, this can result in some functions no longer being available. For information on deleting the cookies, please consult your browser’s help function.