Nana Konama. Deputy Director of the National Programme against Buruli Ulcer in Ghana

“If we had the resources, I would like to invest them in training healthcare and community staff” 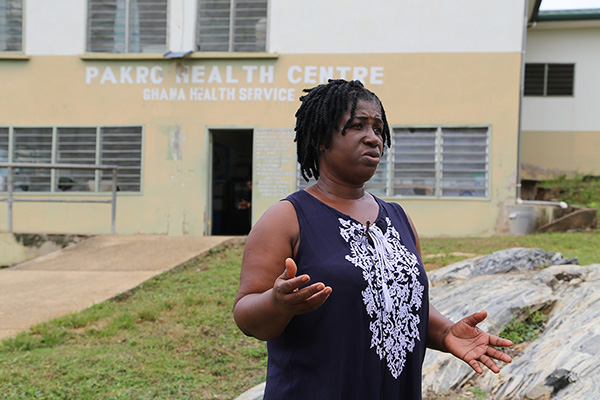 Nana is a specialist in public health and epidemiology. Her work inside the Ghana Health Service involves identifying, monitoring and managing cases of Buruli ulcer in the country, in collaboration with Anesvad Foundation since 1999.

What are the challenges facing a country like Ghana when it comes to combatting forgotten diseases like Buruli ulcer?

On one side we lack resources, both material and human. There aren’t enough resources to adequately take charge of cases, but collaborations with organisations like Anesvad Foundation are key to improving the situation.

Furthermore, the problem of forgotten diseases such as Buruli ulcer stems from a lack of knowledge that still exists among healthcare staff and the general population. Many people are suffering in communities; they don’t have knowledge and believe in superstitions, whereby Neglected Tropical Diseases (NTDs) are mysterious illnesses, a kind of curse. That is why we have to demystify some of these aspects as it will enable us to avoid someone who has contracted the disease taking too long to visit a health centre and to detect what they have in time.

You mention a lack of awareness and stigma as part of the problem in detecting and treating cases swiftly. How do you work with populations affected by NTDs?

Beyond treating and monitoring cases, key work involves raising awareness locally, and community volunteers are crucial in this aspect. Via the national programme, our efforts go into training and supporting them so they can be agents of change in their communities. In fact, some of them have suffered from or are suffering from Buruli ulcer, which is why they have offered to help us combat it. They live in the communities most affected by NTDs and are pivotal to detecting new cases and educating the community in their identification and prevention.

With sufficient resources, which priority activities would you strengthen?

If we had the resources, I would like to invest them in training healthcare and community staff to identify and report on the disease. However, these health materials and qualified staff are most needed in health centres and health posts. With forgotten diseases such as yaws, it can be eradicated, but Buruli ulcer requires a special effort to ensure people know how to identify it and to help them tend to the wounds it causes.

What would you highlight from the collaboration between the National Programme in the fight against Buruli ulcer and Anesvad Foundation?

Our collaboration with Anesvad is a godsend. For a while, I supported the Pakro centre with my own resources and looked after patients. But it wasn’t enough. With the resources Anesvad provides we are getting results, enhancing detection, raising awareness and reducing the presence of Buruli ulcer and other forgotten diseases. Many challenges lie ahead, but I’m convinced we are advancing towards a better future. Ayúdanos colabora
To make this site work properly, we sometimes place small data files called cookies on your device. You can find more information in our cookie policy.
Accept
Configure
Cookie Box Settings
Cookie Box Settings
You can change these settings at any time. However, this can result in some functions no longer being available. For information on deleting the cookies, please consult your browser’s help function.